Salesforce Transit Centre in San Francisco is a one-of-a-kind transport and recreation complex located in one of America's most exciting cities. The jewel of this crown is Salesforce Park. This vast green space showcases how urban parks can be fully integrated within a city, provide ecological benefits, and maintain vibrant and nature-filled community spaces. Except produced the concept in collaboration with the team at Pelli Clarke & Partners, intending to change the way people connect and enhance the city's biodiversity, health, and sustainability.

The redevelopment of the Transbay Transit Center (the name prior to and during construction) was put to tender through a global competition. At the time, was one of the largest architectural competitions ever held. On September 20th, 2007 the TJPA competition panel announced that Except's rooftop garden concept had won.

Except partnered with Pelli Clarke & Partners (formerly Pelli Clarke and Pelli) from conceptualization to design presentation and visualization.

Our design was driven by San Francisco's dire need for inner-city parks to promote biodiversity and provide a vital place for people to connect and socialize outdoors. The concept utilized ecologically-designed space, to provide spatial quality, health benefits, and economic value to their immediate neighborhood and beyond.

The park is 5.4 acres (2.2 hectares) in size and currently caters to approximately 1.1 million residents who live within half a mile radius, as well as hundreds of thousands of annual visitors from outside this area.

Salesforce San Francisco Transbay Center, as it is now known, features innovations such as water and air purification, ecosystem services, and biodiversity boosters to provide a cleaner environment and welcome flora and fauna back into the city. These features are key to contemporary and sustainable urban renewal.

Transbay Terminal: the case for renewal

The original Transbay Terminal was opened in 1939 to serve the city as a train station. It was converted into a bus depot in 1959 after struggling to expand the network and failing to sustain financial viability. Over the following decades, it thrived as a bus terminal, mainly serving San Francisco's downtown area and communities of the Bay Area.

The Transbay Terminal diversified its use over the years with the bus terminal housing a diner, a cocktail lounge, a newsstand, and a police station. The center adapted over the years but always struggled with a longer-term vision. In the 90s, earthquake damage and new safety regulations forced all tenants out and most of the center remained dormant.

In 1999, it was officially announced that the damaged terminal was to be replaced. After more than 70 years of operations, the original Transbay Terminal was officially discontinued as a bus terminal in 2010 before being demolished.

Salesforce Park: the jewel in the crown

The terminal's redevelopment aimed to create a unique and functional replacement for the old transportation hub and create an icon that brought people together for recreation and community development. The new center comprises underground train stations (not yet operational), a bus terminal, and retail space. However, the rooftop park is arguably the highlight for most users.

The park sits atop the 1.5 million square foot Salesforce Transit Center. It comprises walking trails, a "bus fountain" that follows the coaches' travel on the ground floor, a playground, an 800-person amphitheater, and a restaurant. It also has an extensive public square and quiet areas set aside for reflection.

Considering the scope of this project, the environmental concerns were considerable. With Atelier Ten, our ecological engineering partner, the Salesforce Park design culminated in a globally unique proposition. Except was involved in core concept generation and roof park development, including the environmental system, water features, air purification, and funiculars/gondolas. Likewise, we also helped produce the main square, bridge connections, and conceptual park landscape design.

Aside from its ecological purpose and visual beauty, the park is designed for mixed uses and as a sustainability-focused community hub for fitness, performances, education, and cultural engagement. There are 15 entry points to the fully-accessible public park, connected by footbridges to nearby buildings such as Salesforce Tower and 181 Fremont. 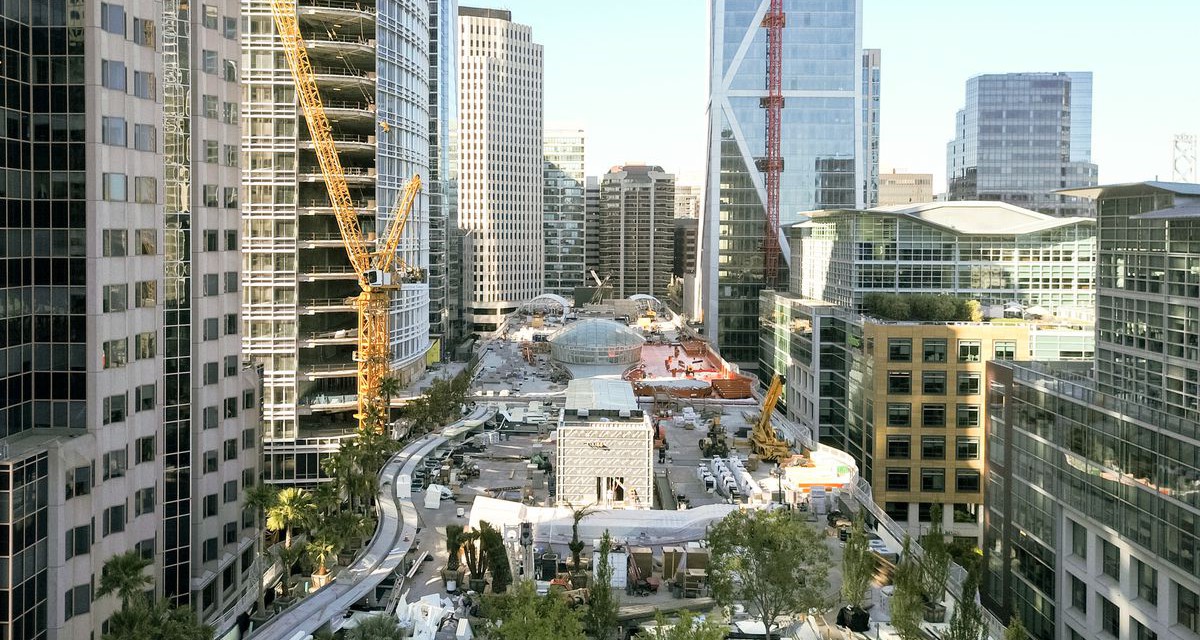 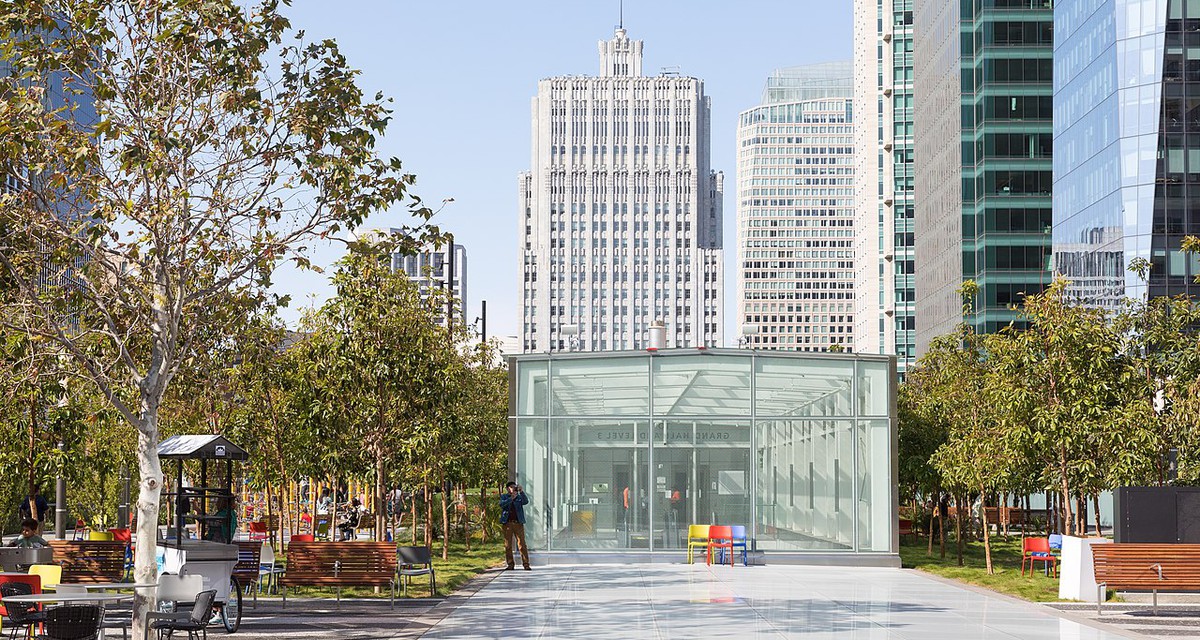 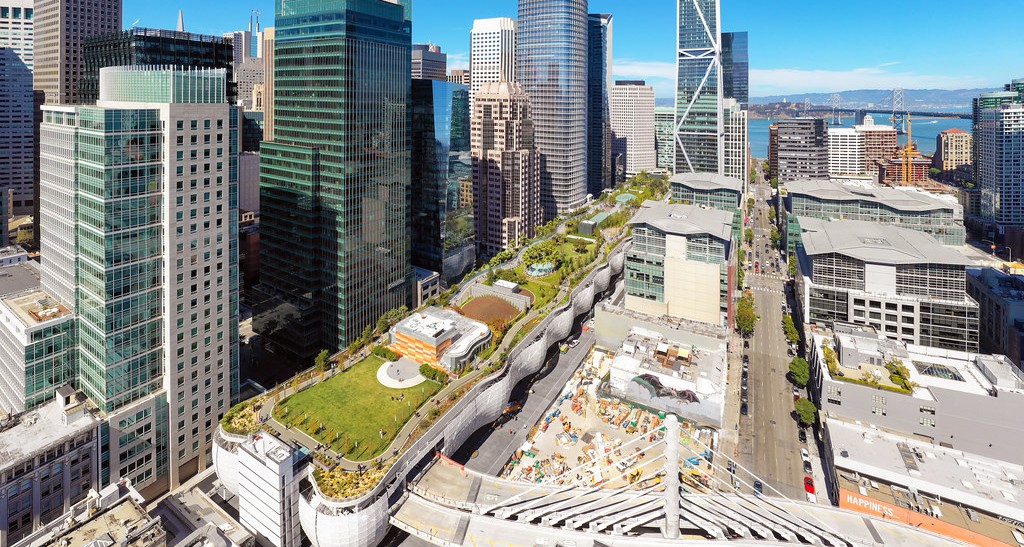 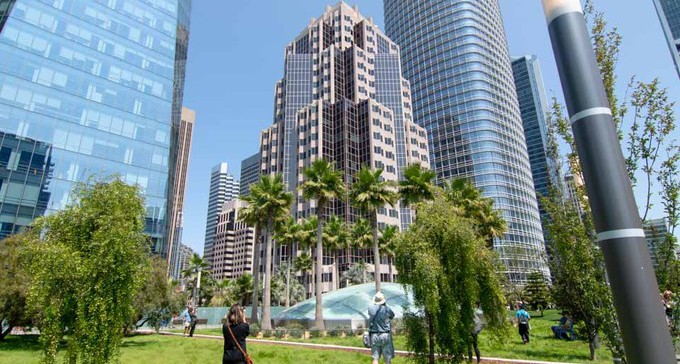 The park at Salesforce Transit Center is unique, not just in size and locality but in regards to the features and functionality of its ecosystem-driven design. It's much more than just a rooftop with a few pot plants. Dotted about are some 600 mature trees and 16,000 plants across 13 distinct botanic areas such as redwood groves, desert and Mediterranean gardens, and a swamp/wetland.

Some of the more unique features that enhance the functioning of Salesforce Park's ecosystem:

Except proposed an innovative profit-sharing scheme to help fund the park, encourage cooperation and actively involve nearby residents and developers with the complex.

First, properties surrounding the park were valued by an independent and well-established third party and compared to future values - projected to five years after its completion.

Such a redevelopment and feature in any part of a city, regardless of the exact locality, undoubtedly adds significant value to nearby properties.

Developers struck a deal with owners to share a certain percentage of this rise in property value. However, the project share was relatively small, and the property owners would gain most of the profits. Despite the low percentage given to the project, it provided enough support capital to ensure the park could remain public and enjoyed by all.

This collaborative profit-sharing initiative is easily replicable and a prime example of how circular business models can fund public spaces and sustainable urban development. 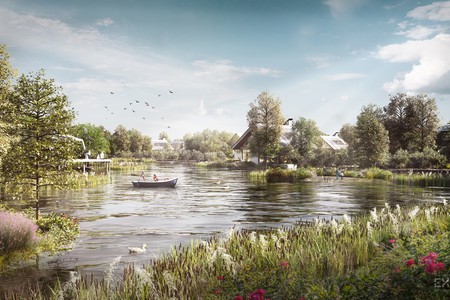 Masterplan for a self sustaining neighborhood

ReGen Villages is a one-of-a-kind master plan for a self-sustained housing neighborhood of 203 houses in the Netherlands. L… 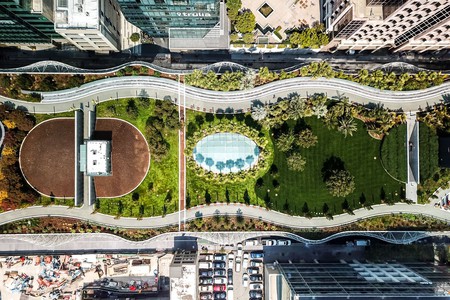 Resilient real-estate that flourish through time 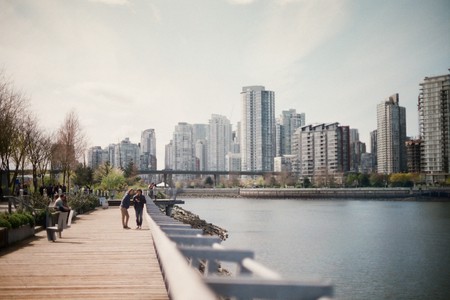 Designing The City of the Future